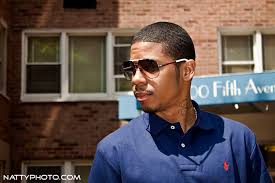 Vado came through The Breakfast Club to discuss how he had plans to form a group with Lloyd Banks, Juelz Santana and Fabolous, amid talk that he is on the verge of signing with DJ Khaled’s ‘We The Best’ imprint.

“That’s how it’s looking but you know there’s nothing guaranteed yet,” he said of his deal with Khaled. “But that’s how it’s looking…We’ve got the same mission and that’s going straight to the top. When I had a sit-down with him (DJ Khaled), he was telling me everything I wanted to hear so you know, it was on and poppin’.”

He also announced that there T.I. had shown interest in signing him but that nothing was official. Later on in the interview, the Harlem, NYC rapper spoke of a super-group he was planning on putting together.

“To be honest, we spoke on it one time. Shout out to Banks. Shout out to Juelz. We was all on a conference call. We was reaching out to Fab. We was trying to get the commission, like a group. We was tryin’ to form some superhero type…But you know people got they albums…So we just fell back with it.”

This could be very promising project to bring some legendary 2000s NY rappers back into the spotlight whilst elevating a name who’s overdue to blow up!