Check this article I wrote about the recent chart success of UK Hip hop artists that was published on MTV’s The Wrap Up today. 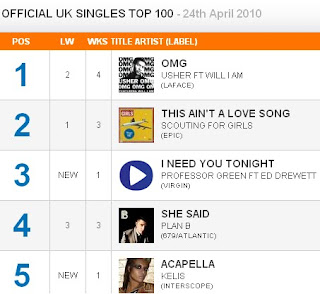 To me the last year of success amongst UK Hip hop and UK Grime (or UK ‘Rap’) has been something I’ve anticipated for the last 10 years. Throughout most of the noughties, UK ‘Rap’ on a commercial/chart level consisted of the likes of Big Brovaz sampling classic english musicals or Blazin Squad butchering US hip hop classics, not to mention the ‘ferocity’ of Mis-teeq showing the world how us British folk rap.

This blurred however the true UK hip hop music, which could be heard from the likes of pirate station Itch FM and weekly event Kung Fu; where I looked up to underground acts like Skinnyman and Taskforce. Alas, despite it’s massive underground following, ‘British made’ Hip Hop was never able to cement a strong reputation amongst the wider audience (especially outside of major cities) which led to labels playing safe and going with ‘plastic’ (or put simply, marketable) acts in expense of more edgy sounding politically charged material .

Around 2003 I went to see Pro Green (a friend of a friend who’d recently changed his name from ‘Oh-Z’) battle at the Jumpoff which was then at the Scala, Kings Cross. He was featured in this 2004 BBC entertainment news report, which has plenty of predictable 8 mile comparisons but makes for nostalgic reading 6 years later. It also adds context to his recent no. 3 chart success and despite having a commercial sound, ‘I need you tonight’ is a good track so you cant hate but congratulate the guy.

Hitting no. 4 in the charts and #1 in the album charts is Plan B with a heavily contrasted sound to his pre-debut album which initially seemed struck me as an acoustic Hackney fusion of Eminem and NYC horror core legend Necro. It seems the tables have now turned as (I suspect under major label influence, and as a result of major UK movie appearences ) he’s hit the top spot with a sound more akin to Amy Winehouse, as part of a concept album about his fictional character ‘Stickland Banks’ being sent to prison for a crime he didn’t commit. To be fair, singing isn’t new to Plan B but I do have reservations with the BBC labelling him a rapper when on the whole he doesn’t rap.

From an objective point of view however, even if Prof Green needs to rap over a 1987 sample of INXS, and singing is in fact the plan b for Plan B, it does shed some more light to the platform that is our underground. Especially when a genuine London hip hop act it rises from the obscurity and exceeds 1st week sales of Kelis, who with David Guetta came in at #5 with the smash Acapella, which I reckon will become one of the biggest R&B tracks of 2010.

Fred again... took a trip to the wild side with new single, 'Jungle' 🐅 http://spoti.fi/NMFUK

Ziggy Marley has pushed back at Sir Lenny Henry's comment about the lack of diversity at Glastonbury Festival, saying that we need to stop "looking at skin colour"